Art and Culture of Gujarat

Art and Culture of Gujarat

Gujarat is one of the most ancient states of India which represents the culture of India at its best. Gujarat is gifted with an affluent culture. Gujarat brags of a very old magnificent culture which has still maintained itself. The state dates back to the Harappan civilization and thus it becomes a convergence of various religions such as Islam, Hinduism, Buddhism and Jainism. The culture of Gujarat is a concoction of customs, languages, arts, institutions, traditions, beliefs, technology, inventions and values.

The art and crafts of the state are exceptional and are famous not only in India but throughout the world. Majority of artists in Gujarat are village people who produced these works of art and craft for their own homes which ended up being the major business of Gujarat. Gujarat’s art and craft industry presents a variety of furniture, handmade carpets, jewelry, metal work, clay items, stone crafts, embroidery and other stuff. The city of Jamnagar is famous for its brass industry.

Art and Crafts of Gujarat

Following are some essential items of arts and crafts of Gujarat: 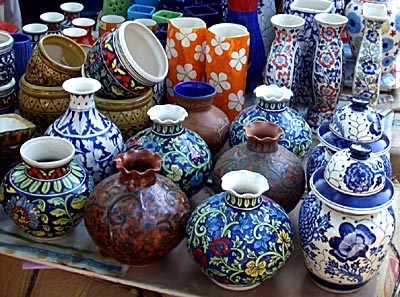 Pottery is among the most valued and ancient art and crafts of the state of Gujarat. The artists are usually the villagers who are experts in the sculpting art and mold clay to craft a variety of beautiful utensils. After making the utensils, vibrant colors are used to paint these to make them look even more beautiful. The artisans of Kutch are globally famous for their mastery in pottery craft. Moreover, Kutch artists are also expert in creating a range of terracotta toys. 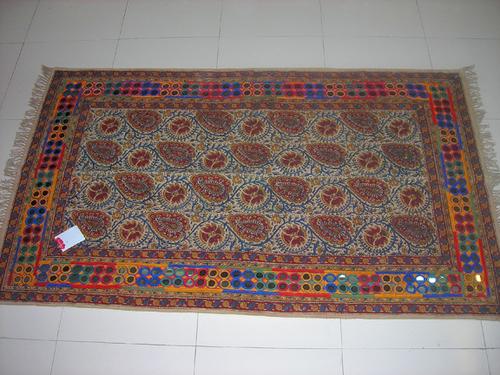 Majority of villages located in Gujarat are well-known for weaving the most excellent rugs, carpets and blankets. These dhurries are exclusively hand-woven on the ancient looms and are a specialty of Kutch. It is quite a difficult task for the villagers of Kutch to make these carpets by hand and thus these are in huge demand all over the world.  The rugs and carpets are famous for their intricate weaving, gorgeous designs and vibrant colors.

Tangalia is a famous handicraft which is made in the Surendranagar district of Gujarat. This strange and unique craft is created by the “Dangasia” community. Tangalia is an attire which looks like a skirt and is worn by Bharvad women especially on the occasion of wedding. The Motabhai Bharvad community wears an exclusive type of motif which is known as “Ramraj Tangalia”.

In the entire India the iron and brass items are mostly produced in Gujarat. Majority of iron and brass stuff are produced in Kutch and Saurashtra. Moreover, beetle nut crackers, copper coated iron bells and cutlery knives are the most typical stuff that is found in these two states. These splendid masterpieces are crafted by the descendents of former sword smiths and court jewelers. Apart from these knives, utensils, scissors and crockery made of iron and brass are also very famous here. 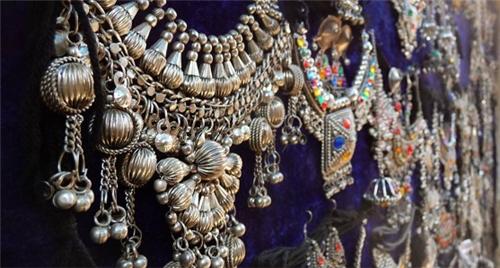 For above 5000 years jewelry has been a tradition of Gujarat. Earlier in Gujarat jewelry was made of natural substances like leaves, flowers, seeds, berries, animal bones, teeth, feathers, fruits and claws. The tribal community uses such jewelry even today. Gujarat offers a range of jewelry for all kinds of occasions. Be it for a wedding ceremony or be it for animals or deities, it has a vast variety of jewelry to offer everyone. Here in Gujarat one can not only find jewelry for human beings but they can also get ornaments to adorn the deities in temples or to beautify the animals like horses and elephants during ceremonies. 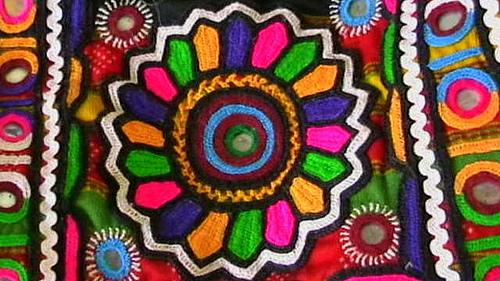 Gujarat is famous for its textile and embroidery industry which are the most flourishing industries of the state. Generally it is the village women of Gujarat who practice the embroidery work. A wide variety of embroidery can be seen here such as Bavalia, Rabari and Banni embroidery. Gujarat also feels proud to produce the golden embroidery which is generally done to augment the cloths that are used in making garments in weddings.

The various types of Gujarati embroideries are given below:

The culture of Gujarat is revealed by its embroidery work and printing work. Gujarat has given birth to majority of the finest and initial textiles. Not only in Gujarat but the printing and embroidery is famous all across the world. 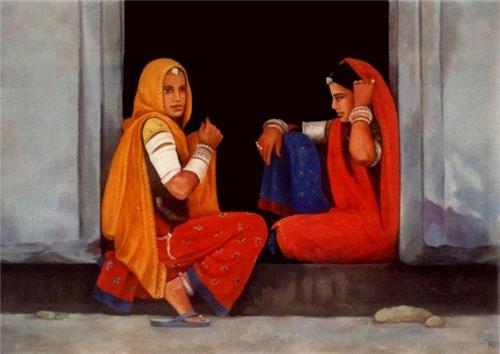 The paintings created in Gujarat are extremely popular and typically consist of religious themes. Gujarat has maintained to create vibrant paintings even after the foundation of Gujarat Sultanate in 15th century and even after the end of sixteenth century during the formation of Mughal rule.

Gujaratis who were formerly called “Gurjars” are inspired by the waves from ancient times which take over the values of culture, arts and traditions. Gujarat has a very strong cultural impact of socio economic political history. Being the birth place of Gandhi Ji, Gujarat has a special importance in the Indian Political History. Moreover, Gandhi Ji’s non-violence movement had a great impact on the Gujaratis.

Gujarati is the main language which is spoken throughout the state of Gujarat. It is the mother tongue for all Gujaratis. Besides Gujarati Surti, Kutchi, Marathi, Punjabi, Charotari, Sindhi and Kathiawadi are a few languages that are spoken in the other regions of Gujarat.

Music and dance, fairs and festivals all these form the most important cultural background of Gujarat people.

Music and Dance of Gujarat

Enjoy this beautiful song before you read further...


In classical music Gujarat has played a very important role. There are a number of ragas based on the names of various territories such as- Khambavati, Bilaval, Lati, Sorathi and Ahiri which contribute to the Gujarati classical music. Marsias are songs that are sung on the demise of people. Gujarat also has a number of folk songs which are known as Rannade, Nupital and Laullaby. There is a special kind of temple music which is sung by the Vaishnava cult.

The various folk dance forms that represent the dance and music of Gujarat are: 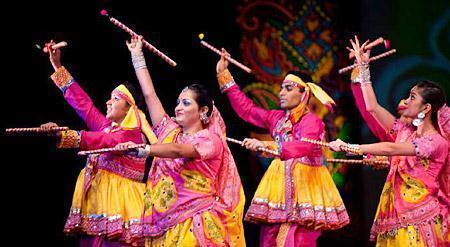 Raas is a very famous and traditional dance form of Gujarat which stemmed from Saurashtra and Kutch. It is also said that Raas hails from Puranic era. Raas dance is also known as the kind of dance which was performed by the “Gopikas” of Shri Krishna.

This dance goes along with musical instruments and in between either two sticks is stroked together or claps are given after fixed intervals. The number of people taking part in the dance may be 8 or 16. Sometimes the number of dancers can also increase up to 32 or 64. These dancers not only dance but they sing in chorus as well. There are 3 different forms of Raas which are as follows:
Gof is another kind of Raas dance in which the participants hold colored strings attached at the top. Thereafter, the performers move in various patterns weaving attractive designs.

The Raas dance is used in various parts of India but in diverse ways. Moreover, the various forms of Raas dance have gained appreciation all over the world. The main Raas forms that are appreciated out of the country are the Garba Raas and Dandiya Raas. The Dandiya Raas is mainly performed in Gujarat during the festival of Navaratri. Dandiya Raas is performed by men and women dancing together in 2 circles and they carry sticks in their hands. These sticks or “Dandiyas” are roughly 18 inches long.

During the Raas dance very vibrant and vivid dresses are worn by the dancers. Men usually wear tight trousers with a short shirt along with a head cover. Women normally wear a ghagra, a choli and an odhani to cover their heads. The entire costume is decorated with silver jewelry and attractive beads. Women also beautify themselves with bangles, necklaces, anklets, heavy earrings, amulets and head ornaments. The music played during the Raas dance is pretty traditional and uses instruments like tabla, nal, dhol and harmonium. 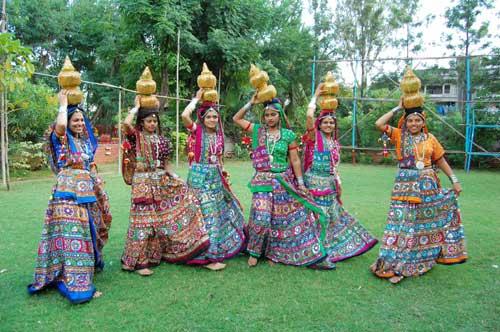 Garba is another traditional dance form in Gujarat which is performed by the women during the festivals like Navratri, Vasant Panchami, Holi and Purnima. The “Garba” is derived from “Garbha Deep” which means a lamp with a pierced earthen pot which represents new life.  In Garba dance women keep the pot with lamp inside it on top of their heads. Thereafter, they swing in circles by singing and clapping at regular intervals. Women wear beautiful and vibrant ghagra, cholis and bandhani dupattas accompanied by gorgeous jewelry. Nowadays, men are also taking part in Garba dance and they wear churidar, kehediyu and a turban. Nal and dhol are the instruments that go along with the Garba dance.

This dance is performed mainly to show respect to Ma Ambaji. During the Garba dance the deity is placed at the center and women encircle it by making circles. The rhythm of the Garba dance gradually speeds up and is maintained by a drummer (or “Dholi”).

Apart from Raas and Garba there are some more folk dances of Gujarat which are- Bhavai, Hudo, Tippani folk dance, Dangi Nritya and Vincchudo dance.

Bhavai is performed in an open stage with men and women putting earthen pots on their heads and dancing while keeping a balance so that the pots do not fall down. Hudo is a famous dance form which is performed by the shepherd women and men of the Panchal region in Gujarat. In Hudo, women bedeck themselves in beautiful costumes along with an embroidered umbrella with mirror and lace work. Tippani folk dance is famous among the Koli and Kharva habitants dwelling in the coastal area. Tippani finds it origin from Sorath (in Saurashtra) and the dancers perform it in the form of fisherman and sailor. Dangi Nritya is a famous dance form in Dang of Southern Gujarat. This dance is performed by tribals during Holi, Diwali and weddings. The main style of this dance is to hold hands and form chains. Vincchudo dance is a folk dance which is mainly performed during the festival of Navaratri and it portrays a range of stories about the various villages in India.

Fairs and Festivals of Gujarat

Gujarat is also known as the “Land of fairs and festivals”. This vibrant state of India celebrates above 3500 festivals and fairs every year. This is also one of the main reasons for a plethora of tourists to throng Gujarat each year.

In the month of January the main festivals celebrated here are Kite Festival and Modhera(dance festival).

In February-March the Bhavnath Festival and Kutch Utsav are celebrated.

In July-August the Janmashtami and Rath Yatra are celebrated with great enthusiasm.

In August-September the Ravechi Fair, Tarnetar Fair and the Bhadra Purnima Fair are mainly celebrated.

In October-November festivals like Deepavali and Navratri are celebrated and among fairs the Shamlaji fair and the Vautha Fair are prevalently celebrated.

The fairs in Gujarat are a symbol of religious, social and cultural aspirations. Recently owing to the “Vibrant Gujarat Summit”, the fairs and festivals in Gujarat are now concentrated on the Global map. Due to this reason a large number of tourists are getting attracted to Gujarat for the “Kite Festival and Investors” Summit. Therefore, the trade fairs, industrial fairs and numerous commercial fairs are becoming more and more popular in Gujarat.

Gujarat fairs in festivals are mainly governed by the lunar and solar calendars of ancient world astrology. They generally rotate about a particular event such as a religious occasion or harvest season.