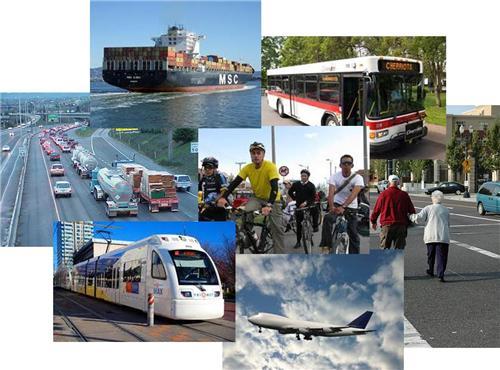 The broad network of railways and roads in Gujarat connect various parts of the state as well as with the other parts of India. Apart from this, Gujarat also boasts of numerous airports which meet the needs of airline passengers. With the help of all these highly developed transportation facilities in Gujarat, travelling has become faster and easier for the travelers.

The GSRTC is an organization to offer efficient road transport services to the public. The GSRTC was launched on 1st May in the year 1960. The main aim of the GSRTC is to offer bus services within the state of Gujarat as well as its neighboring states. 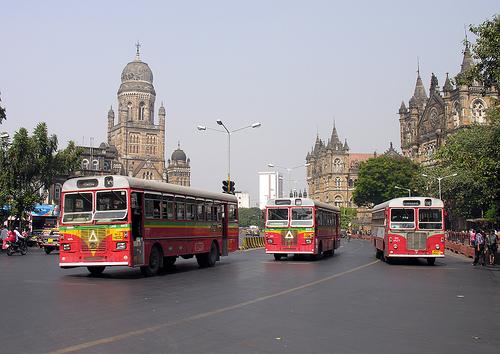 This amazing growth in such a short span is due to the persistent efforts of above 50000 employees, self-motivated management and constant support from the Government of Gujarat. Some of the remarkable technical facilities formed by the GSRTC are:


Role of GSRTC in IT

The following are the contributions of GSRTC in the field of IT:

The bus services offered by the GSRTC can be divided into the following categories:

Interstate Bus Services
This kind of service connects various cities of Gujarat with the neighboring states like Madhya Pradesh, Maharashtra and Rajasthan.

Parcel Services
This type of service is presented for moving goods.

City Services
City bus services are offered by the GSRTC in the cities like Surat, Vapi, Baroda, Ahmedabad and Gandhinagar within the Gujarat state. 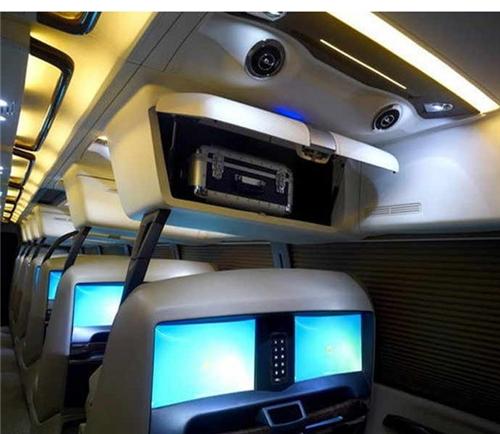 GSRTC has introduced luxury buses with the latest facilities on tourist spots throughout the Gujarat state and even out of the state. These luxury buses are equipped with wireless internet service. All the luxury buses are compatible with GPS system and consist of 2 LCD screens, one LED board at the front to indicate destination and charger points in each row of the seats to charge mobile and laptop. Last but not least each seat consists of a personal AC vent.

The luxury bus services run from the city of Ahmedabad for Surat, Dwarka, Vadodara, Bhavnagar, Somnath, Gandhidham, Rajkot, Mount Abu and Srinathji. Moreover, these services also run from Palitana, Surat, Palanpur and Vapi to Mumbai. There is also a direct service from Surat and Vadodara to reach Srinathji. 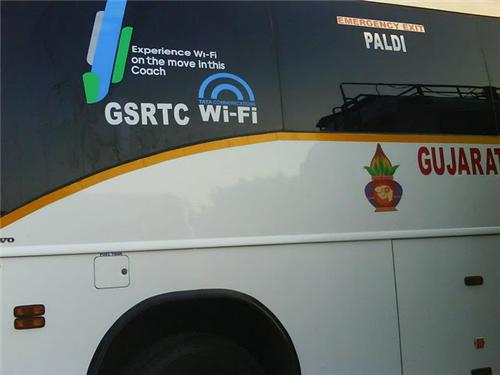 The following are the cities which offer Volvo services run by GSRTC:
GSRTC offers free wi-fi internet access to the passengers traveling in Volvo buses that run between Ahmedabad and Rajkot. 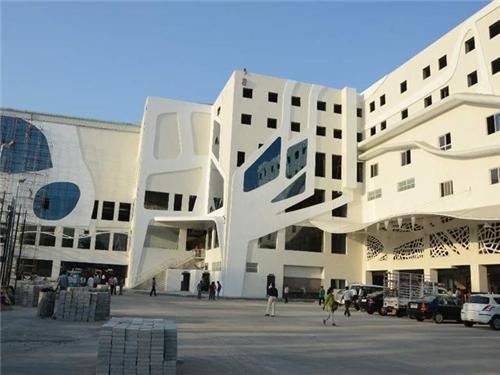 The various bus depots situated in different parts of Gujarat are:

The various kinds of buses run by GSRTC are express, luxury, semi-luxury, intercity and ordinary buses. One can choose any kind of bus as per their own preference and comfort. Seater, sleeper and semi sleeper buses are also there for the passengers. Seater buses are recommended for short trips, whereas for long trips sleeper buses (that offer large space and maximum comfort) should be chosen. 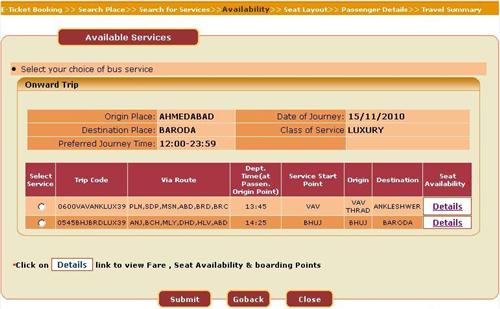 GSRTC runs on more than 222 bus services on 20 routes per day. The top routes that are covered by Gujarat State Road Transport Corporation are: 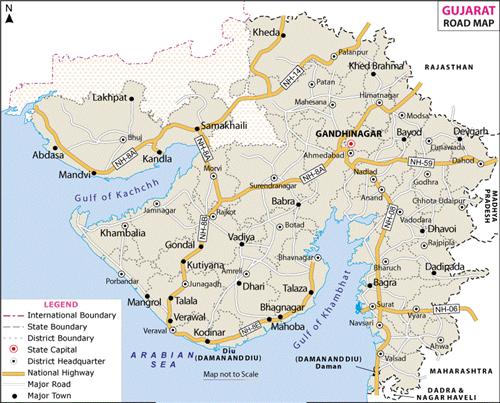 The efficient road transport system of Gujarat offers some of the best highways to facilitate traveling on the roads.

There are total 12 national highways in Gujarat that are mentioned below:

Following are a few state highways constructed by the Government of Gujarat: 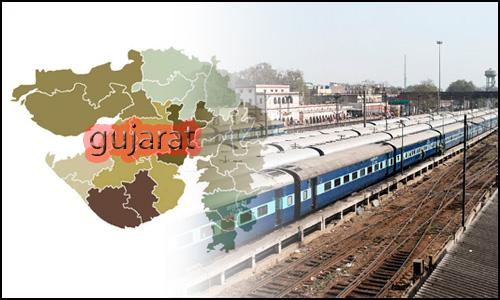 This is the busiest and largest railway station in the entire state of Gujarat. Following are some main details about the Ahmedabad Railway Station:
This is the first railway station which launched the hand push luggage trolley service for the commuters. The charge for a single luggage trolley is just 5 Rs.
The following are the facilities available at Ahmedabad Railway Station:
Important trains from Ahmedabad to Mumbai are:

Some main details about the Vadodara Railway Station are given below:
Vadodara railway station was constructed in the year 1861 by Maharaja Khanderao Gaekwad. This is one of the busiest stations of India and also of Gujarat state. This station is also one of the biggest electric locomotive sheds in the Western Railway Zone.

Important trains from Vadodara to Mumbai are:

Inside the Station you will find ATMs of Axis bank, State Bank, Canara Bank, Dena Bank and also ATM's of some other bank in Main Building (Platform-1 Side). Food Express Restaurant which is opened for all 24 hours is located at 1st floor.

Here is some important info pertained to the Rajkot Railway Station:

The following are the facilities offered by the Rajkot Railway Station:

Important trains that pass through the Rajkot Railway Station are:

Following are some details about the Jamnagar Railway Station

Given below is some important information regarding the Porbandar Railway Station:

The Porbandar Railway Station comes under Bhavnagar division’s Western Railway zone. During the time of Princely reign this station was possessed by the Porbandar State railway. In 1888 the Porbandar-JamJodhpur metre gauge line was launched and in 1948 it was joined into the Saurashtra railway. In 1951 on 5th Nov the Western railway undertook it. Later in 2011, the gauge conversion of the Wansajaliya to Jetalsar was accomplished which facilitated connectivity to the Somnath city.

Gujarat is one of the most sought-after tourist spots in India. The state is not only preferred by the domestic tourists but it is also well-liked by the international tourists as well. Therefore, in order to facilitate the connectivity for both, the government offers numerous airports in Gujarat. There are total 10 airports in the state out of which one is the international airport which is located in Ahmedabad. The rest of the airports in Gujarat are well-connected to the other important cities of India such as Kolkata, Delhi, Mumbai and many more. There are numerous national as well as international flights which ply from these airports for the ease of the tourists. 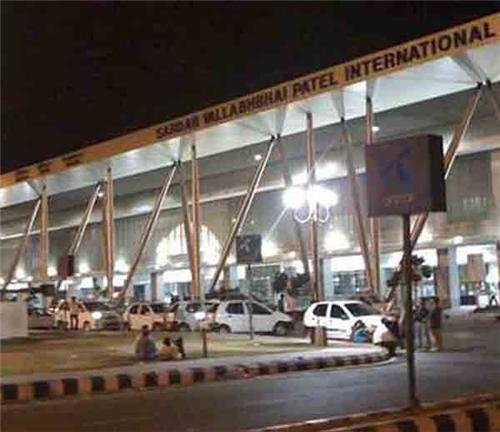 Kandla Airport
This airport is located near Gandhidham at a place known as Kandla.

Jamnagar Airport
The Jamnagar airport is a domestic airport of Gujarat which is situated approximately 10 kms away from the Jamnagar city.

Rajkot Airport
This airport is located 4 kms away from Rajkot city. Read More...

Vadodara Airport
This is another domestic airport of Gujarat which is located 5.7 kms from the Vadodara city.

Keshod Airport
This airport is located 3 kms away from the city of Keshod in the district of Junagarh.